March 20, 2019 – The Mouser-sponsored Formula E team is heading to Sanya, a resort city on the southern end of China’s Hainan Island, on March 23. The race marks Formula E racing’s return to mainland China for the first time since the Beijing street races in seasons 1 and 2.

Mouser Electronics is sponsoring the GEOX DRAGON Formula E team throughout the 2018–19 ABB FIA Formula E Championship racing season, in collaboration with TTI, Inc. and valued suppliers Molex and AVX. This is the fifth-straight year that Mouser and Molex have sponsored Formula E racing. 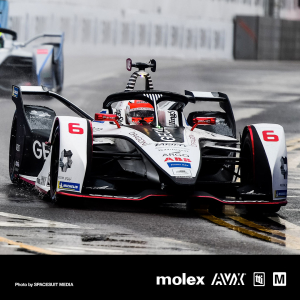 Fans can cast a vote for López and Nasr in FANBOOST, which allows fans to play an active role in influencing the outcome of the race. FANBOOST gives fans the opportunity to vote for their favorite driver and award them an extra boost of power during the race. The five drivers with the most FANBOOST votes are awarded a significant burst of power, which they can deploy in a 5-second window during the second half of the race. FANBOOST voting for the Sanya E-Prix opened March 18 and is available up to 15 minutes into the race.

After Sanya, the series travels to Europe and the Rome E-Prix on April 13, followed by Paris on April 27, Monaco on May 11, Berlin on May 25 and Bern on June 22. The series once again ends the season with a double-header in New York, July 13 and 14.

For more information about Formula E and to register and vote in FANBOOST, visit http://www.mouser.com/formula-e.

Mouser Electronics, a Berkshire Hathaway company, is an award-winning, authorized semiconductor and electronic component distributor focused on rapid New Product Introductions from its manufacturing partners for electronic design engineers and buyers. The global distributor’s website, Mouser.com, is available in multiple languages and currencies and features more than 5 million products from over 750 manufacturers. Mouser offers 23 support locations around the world to provide best-in-class customer service and ships globally to over 600,000 customers in more than 220 countries/territories from its 750,000 sq. ft. state-of-the-art facility south of Dallas, Texas. For more information, visit http://www.mouser.com.

TTI, Inc., a Berkshire Hathaway company, is an authorized, specialty distributor of interconnect, passive and electromechanical (IP&E) components and the distributor of choice for industrial and consumer electronics manufacturers worldwide. Broader and deeper inventory, leading-edge products and custom supply chain solutions have established TTI as the leading specialist in electronic component distribution. Globally, the company maintains 1.9 million square feet of dedicated warehouse space containing over 850,000 component part numbers. Along with its subsidiaries, Mouser Electronics, Sager Electronics, and TTI Semiconductor Group. TTI employs over 6,000 employees and is represented in over 100 locations throughout North America, Europe and Asia. For more information about TTI, visit http://www.ttiinc.com.

GEOX DRAGON was founded in 2006, by Owner and Team Principal Jay Penske. GEOX DRAGON is headquartered in California (Los Angeles), the largest EV market in the world, and has additional racing operations in Britain (Silverstone, UK). In 2014, GEOX DRAGON became one of the three founding teams of the FIA Formula-E Championship. The team finished Runner-Up (2nd place) in the Championship in 2015 and scored the first ever Formula E race wins in both Germany and Mexico in 2016 and 2017. GEOX DRAGON develops its powertrains under the Penske Autosport marque. The team’s engineering and mechanic personnel are some of the finest and most experienced engineers and crew in the world, collectively accumulating over 185 years of racing experience, and achieving over 220+ race wins and 17 Championship titles. GEOX DRAGON’s pilots for Season 5 include three-time World Touring Car Driver’s Champion and multiple FIA Formula E podium finisher José María López and Formula 2 race winner and former Formula 1 pilot and reigning IMSA Champion, Felipe Nasr. GEOX DRAGON’s team motto is the Latin phrase “E Pluribus Unum” – meaning “out of many, there is one.”