Just over halfway through the season, Günther nabbed a fifth-place finish on a rain-slicked track at the Paris E-Prix. In the next race, at Monaco, López earned a hard-fought top-10 finish plus one of the race’s coveted FANBOOST slots — where fans vote for their favorite driver to award them a significant, five-second burst of power. Two races later, Günther put up an impressive Super Pole run after qualifications in Bern and expertly powered the No. 6 electric racecar to another fifth place finish after scraping through trouble early in the race.

This was the fifth season of the ABB FIA Formula E Championship and the fifth season Mouser Electronics was a team sponsor along with valued supplier Molex. Mouser and Molex sponsored the team throughout the season in collaboration with AVX and TTI, Inc.

“López, Günther, and the entire team showed great determination in a very demanding season,” said Todd McAtee, Vice President, Americas’ Business Development for Mouser Electronics. “Everyone here at Mouser is proud of the team and their awesome top-10 finishes, and we’re excited to be a part of the electric car racing revolution and the GEOX DRAGON racing team.”

“Molex is proud to have once again teamed up with Mouser Electronics to sponsor this dedicated motorsport team,” said Fred Bell, Vice President of Global Distribution, Molex. “At Molex, we are always looking for ways to advance the electric automotive industry by developing solutions that help racing teams and everyday drivers alike.”

“TTI would like to congratulate the entire team for the hard work they put in all season long. We are excited to be a part of such a cutting-edge racing series and to promote all the new technologies that go with it,” said Mike Morton, TTI’s Chief Operating Officer.

“This year’s team fought hard in every race, and we at AVX congratulate them on that determination,” said Eric Pratt, AVX’s Senior Vice President of Marketing. “It is special to be a part of such an advanced racing series and to be on the forefront of the electric car movement.” 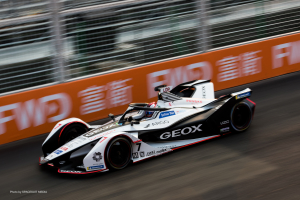 Mouser Electronics, a Berkshire Hathaway company, is an award-winning, authorized semiconductor and electronic component distributor focused on rapid New Product Introductions from its manufacturing partners for electronic design engineers and buyers. The global distributor’s website, Mouser.com, is available in multiple languages and currencies and features more than 5 million products from over 750 manufacturers. Mouser offers 26 support locations around the world to provide best-in-class customer service and ships globally to over 600,000 customers in more than 220 countries/territories from its 750,000 sq. ft. state-of-the-art facility south of Dallas, Texas. For more information, visit http://www.mouser.com.

GEOX DRAGON was founded in 2006, by Owner and Team Principal Jay Penske. GEOX DRAGON is headquartered in California (Los Angeles), the largest EV market in the world, and has additional racing operations in Britain (Silverstone, UK). In 2014, GEOX DRAGON became one of the three founding teams of the FIA Formula-E Championship. The team finished Runner-Up (2nd place) in the Championship in 2015 and scored the first ever Formula E race wins in both Germany and Mexico in 2016 and 2017. GEOX DRAGON develops its powertrains under the Penske Autosport marque. The team’s engineering and mechanic personnel are some of the finest and most experienced engineers and crew in the world, collectively accumulating over 185 years of racing experience, and achieving over 220+ race wins and 17 Championship titles. GEOX DRAGON’s pilots for Season 5 include three-time World Touring Car Driver’s Champion and multiple FIA Formula E podium finisher José María López, Formula 2 race winner and former Formula 1 pilot and reigning IMSA Champion Felipe Nasr, and GEOX DRAGON Test and Reserve Driver, Maximilian Günther. GEOX DRAGON’s team motto is the Latin phrase “E Pluribus Unum” – meaning “out of many, there is one.”