How to Use Digilent DMM Shield with Arduino

The Digilent DMM Shield is a 5 1/2 Digit digital multimeter, designed for use with microcontroller boards that are equipped with the Arduino shield header. The device has 7 measurements functions (AC/DC Voltage, AC/DC Current, Resistance, Diode, Continuity) and is factory calibrated. It is accessed through a custom SPI interface, using digital IO pins exposed in the DMM Shield connector. The interface to DMMShield functionality is implemented as a Command interpreter running over standard Arduino Serial Terminal, or as direct commands to be called from the main sketch. 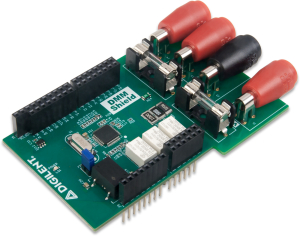 The following list shows the commands implemented in the DMMCMD module: 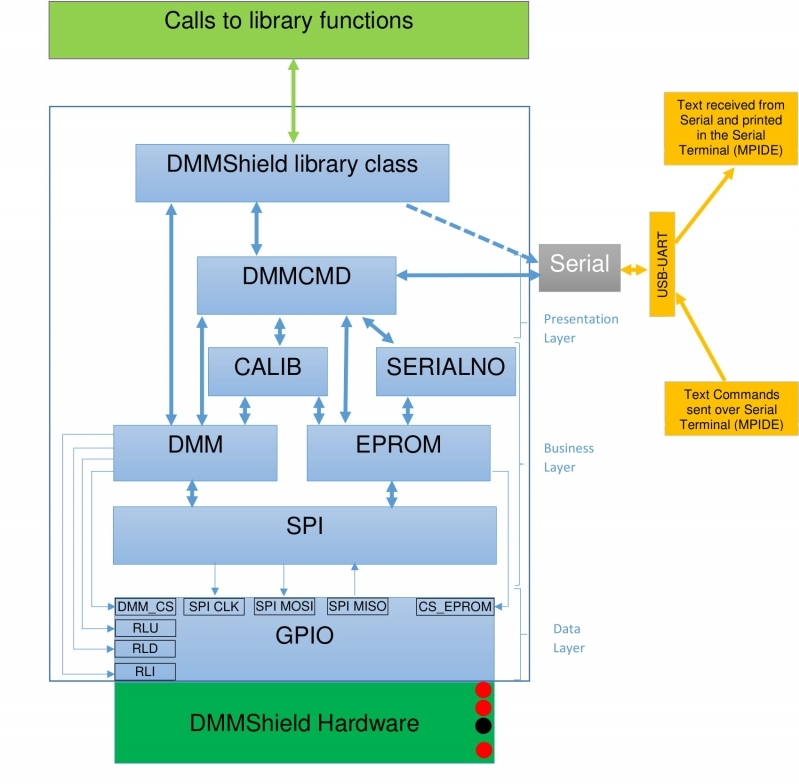 Library Usage
The library can be used as a normal Arduino library: The folder must be placed in the proper Arduino libraries folder for example <user folder>\Documents\Arduino\libraries, depending on sketch location defined in Preferences window (File / Preferences). In the sketch the DMMShield can be used as any class object, for example by declaring an object of class DMMShield and calling its member functions DMMShield dmmShieldObj; dmmShieldObj.CheckForCommand();

Further possible developments
The current DMMShield implementation provides all the DMM functions through a text Command interpreter. User may implement other approach in order to access the DMMShield modules: DMM module, CALIB module and EPROM module. For example a function accessing the user locations of EPROM can be implemented, using the existing function in EPROM module.

Library Modules
The DMMShield class implements the DMMShield Arduino library object main class. Normally its functions are called from the Arduino sketch. The library is initialized using DMMShield::begin function. As an interface between the user and DMMShield functionality, it provides three approaches:

Find the library modules and setup details on the Digilent Reference Page. DMM Shield is available in Elfa Distrelec.