Diodes Incorporated announces an enhanced version of its popular sounder driver for small and portable devices. The PAM8904E delivers higher performance at a lower voltage in a smaller package.
Miniature piezo and ceramic sounders are now used extensively in trackers, alarms, health monitors, security devices, and smart sensors as a form of audio user interface. The sounders’ small size allows them to be fitted into portable and wearable devices, such as IoT-enabled trackers, as well as enabling miniature smart sensors that monitor the environment, including security detectors and water, smoke, and CO2 alarms. The PAM8904E sounder driver is designed to meet the requirements of the smallest application operating from extremely low voltages. 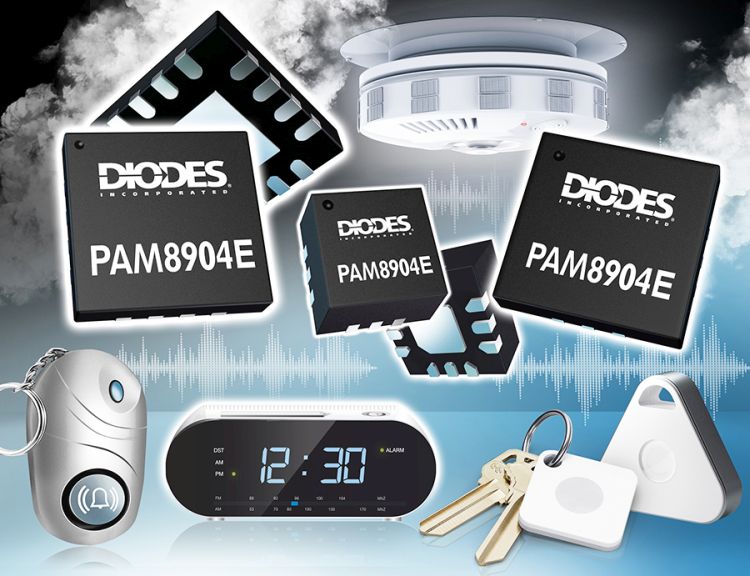 The PAM8904E can support both single-ended and differential output modes with minimal external components. The device features a wide-input voltage supply range between 1.5V and 5.5V and a shutdown current consumption within 1µA. The sounder also accepts an input signal between 20Hz to 300kHz. Despite its small size, the PAM8904E integrates a charge-pump boost converter that operates in 1x, 2x, and 3x modes. As such, the PAM8904E is able to generate an output voltage up to 18V peak-to-peak from a 3V supply voltage or 27Vpp from a 4.5V supply.
The enhanced option can now drive a sounder load up to 47nF, which is significantly higher than the drive capability of competing devices. Many competing devices can typically only drive a load of 15nF and require a higher supply voltage. The PAM8904E also features thermal shutdown, overcurrent protection, and short-circuit protection as well as an automatic shutdown and wake function that can help maximize the operational lifetime of battery-powered devices.
The PAM8904EGPR is available in the W-QFN2020-12 Type A package, which measures 2.00mm × 2.00mm wide × 0.80mm high. Other packaging options include U-QFN3030-12 Type A (PAM8904EJPR) and U-QFN3030-16 (PAM8904EJER).
Further information is available at http://www.diodes.com