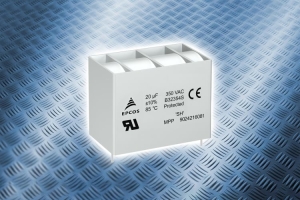 TDK Corporation (TSE:6762) presents a new series of AC filter capacitors that are UL 810 approved at the component level and carry the CE mark. The capacitors of the B32354S3* series are designed for a rated voltage of 350 V AC and are available with capacitance values of 10 µF to 40 µF. The lead spacing is 52.5 mm. Because of the segmented film structure, the new capacitors conform to the highest safety class of UL 810 at Component Level.

Thanks to their improved protection against moisture, they pass a temperature, humidity, bias (THB) test at 85 °C, 85 percent relative humidity and applied rated voltage for 1000 hours. The life expectancy of the new series according to IEC 61071 is 100,000 hours. In addition to AC applications, the rugged capacitors are suitable for output filtering of power supplies and inverters.

Further information on the products can be found under http://www.tdk-electronics.tdk.com/en/ac_capacitors.